The Human Services Coalition recently decided to organize a retrospective of health care reform before moving forward to the implementation of the new law. To help them carry out their goal, they have enlisted the unrivaled talent of health care hip hop sensation Sick Rick. The result: pure genius. Enjoy.
*WARNING: EXPLICIT CONTENT. PARENTAL DISCRETION ADVISED*
-Caitlin & Cal

A Casa Bella Transitional Housing will host a bowling party June 5 from 1 -4 pm at AMF Pembroke Pines Lanes, 1940 North University Drive, Pembroke Pines, 33024. Proceeds from this event will benefit A Casa Bella, which provides homes for women and children with nowhere else to go. I was at A Casa Bella's Mother's Day event earlier this month and was moved by the stories of women who find themselves homeless after a divorce or financial upheaval. They produced a great video about these heroines (watch the trailer) that illustrates the need for housing assistance in our community. (I was also happy to see HSC friends Martena Johnson and Amina Rodriguez honored for their dedication to parenting.) Tickets to the bowling party are $15.00. RSVP's requested. 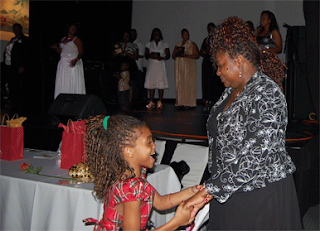 Martena Johnson with her daughter at the A Casa Bella Mother's Day event May 1. Martena is a Parent Leadership Training Institute grad and an A Casa Bella honoree.
Posted by Caitlin at 11:33 AM No comments: 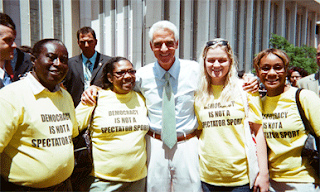 For more of the scoop on the Florida legislature, attend the Downtown Bay Forum May 26.
Posted by Caitlin at 1:28 PM No comments: 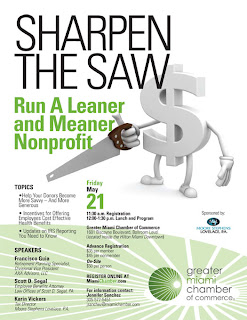 Register online.
Posted by Caitlin at 1:36 PM No comments:

Live from the Roots in the City Farmers Market

We were chilling the other day at the farmers market in Overtown where it was 1 billion degrees outside. Delerious from heat exhaustion, Caitlin, Nadine and I got on camera to give you an insider's view of the Rooot in the City Farmers Market.

Caitlin & Cal Imagine Miami with construction paper and a window

Have you ever had an idea that would improve the community for everyone? So have we! Check out how Caitlin and I envision our office's block then let us know what you think this Friday at the Imagine Miami Changemaker Conference. Don't forget to sign up at www.hscdade.org.

We're so excited about the upcoming Changemaker Conference that we had the irresistable urge to vlog. Yes, we get get paid to do this: Posted by Caitlin at 8:45 AM No comments: