Florida's poverty a problem of our own making

Contributed by Paul Hunt
School of Social Work, Florida International University
I greatly appreciate Daniella Levine’s Op-Ed piece “Rise in Poverty Threatens Florida’s Future (Miami Herald, September 24, 2011) in which she speaks about the plunge Florida is currently taking into an abyss of wider and wider spread poverty.  This is a frightening situation which everyone in our state needs to take very seriously.  However, I would like to add that this is a situation mostly of our own making.  It is critical that we first decide what kind of community we want to be.  A series of decisions made by elected officials and community leaders, seemingly ratified by the residents of our state, have created conditions in our community that are completely unsustainable and have led to a state of a rapidly widening gaps in income and very unfair burdens upon those least able to bear them.
I refer to the work done over the years by the well-respected Florida Center for Fiscal and Economic Policy, a non-profit, independent research organization that also develops new ideas and advises policymakers on state fiscal and economic policy in order to improve the well-being of all Floridians.  A recent report by the Center cites the fact that Floridians in poverty now number more than the total populations of Tampa and Orlando combined.  However, the Center’s report contends, an unbalanced tax structure and recent budget cuts hold back economic recovery.  Basically, Florida’s tax structure is not adequate to meet the needs of its people nor is it a fair system of taxation.  Of Florida’s $69.2 state budget, about one-third ($23.9 billion) comes from General Revenue and about 73% of General Revenue is from the Florida state sales tax.  Another $24 billion of the state budget comes from the Federal Government.
Florida’s tax system is the second-most unfair in the country.  The Institute on Taxation and Economic Policy (ITEP), a non-profit, non-partisan think tank that works on state and federal tax policy issues, reported that in 2009 the poorest 20 percent of Floridians paid an average of 13.5 percent of their incomes in Florida taxes while the wealthiest 1 percent paid 2.1 percent of their incomes in Florida taxes on average.  While Florida has the 15th lowest state and local taxation in the country as a share of personal income, the heavy reliance by Florida on property and sales taxes basically means Florida is a low-tax state for the wealthy but not for low and middle income Floridians.  State and local taxes paid by the poorest 20 percent of nonelderly Floridians are the second highest in the country.
In recent years the Florida Legislature has eliminated taxes on wealthy Floridians and has increased regressive taxes and fees each year, 2009 being one in which these taxes and fees were raised by more than $2 billion.  Florida has more than 240 sales tax exemptions totaling annually some $10.4 billion lost to state revenue.   And there are more exclusions and exemptions that force Florida to lose out on billions more in potential revenue.
And the gap between the low and middle income and high income citizens continues to widen.   The U.S. Census Bureau reports that, nationally, the 40 percent of the lowest income Americans earned only 12 percent of all household income.  Nearly 75% of all household income was earned by the top 40 percent of the wealthiest households in the country.
Until Florida addresses its widening disparities in income and its unfair tax structure, the state will continue to lose ground as a place that has the well-being of all of its people as its first and foremost priority.  We only have ourselves to blame.  As long as we continue to blindly elect people to public office who will not address these tremendous challenges that the state continues to face, we will find ourselves in an ever-deeper hole out of which we need to dig ourselves.  We need to collectively decide what is the community we want to be and then demand that our political and community leaders take the necessary steps to get Florida back on track.
Posted by Caitlin at 2:35 PM 1 comment:

Contributed by Daniella Levine
Originally published by the Miami Herald.

For 16 years, Catalyst Miami has connected families with the services they need. Our office used to see a steady trickle of people; that trickle has become a deluge.

Recently, we helped a social worker with years of experience apply for SNAP (formerly food stamps); he has been unemployed for several years. Senior volunteers with management, finance or marketing experience work for us at minimum wage. We see every day that the middle class has become the new poor.

As troubling as these numbers are, they understate how many Americans struggle to make ends meet. The Census Bureau considers a family of four to be living in poverty if its income is below $22,314; most studies suggest families need at least twice that to pay their bills.

People become poor when they cannot find work. Today, one in 10 workers in Florida and one out of 11 nationally are unemployed. We all know someone who has been unemployed: Almost one in three workers experienced unemployment or underemployment at some point in 2009. Nationally, six million workers — that’s how many people live in Tennessee — have been out of work for at least six months. These workers have spent their savings and many have exhausted their unemployment benefits.

For those living in or near poverty, persistent hardship is a fact of life. A Gallup poll shows that nearly one in three Florida families with children have had times in the last two years when they did not have enough money to buy food. Florida has the highest rate in the nation of people struggling to keep a roof over their heads: nearly 700,000 households pay more than half their income in rent. And one in four Floridians has no health insurance.

Poverty and unemployment also have longer term consequences. Unemployed workers lose critical job skills. Poor children’s health and development suffers, and they do worse in school, threatening their ability to become productive workers as adults. Seniors in poverty can’t afford the healthcare they need to stay strong and independent. That limits our capacity for sustained economic growth and harms us all.

It doesn’t have to be this way. President Obama’s jobs package would reduce the number of people falling out of the middle class and build a stable, strong economy. In Florida it would create over 100,000 jobs directly through investments in transportation, education and communities; it would also fuel more jobs by reducing taxes, while extending unemployment benefits.

This month, a congressional “super committee” will begin developing a plan to reduce our federal deficit. The surest way to reduce the deficit is to get people back to work and paying taxes. The “super committee” should incorporate in its work essential components of the president’s jobs bill. It should ask millionaires and profit-rich corporations to pay their share in taxes and cut expensive contracts and other waste in our defense budget. Attempts to reduce the deficit through cuts in healthcare or other essential services are bound to fail because they will reduce jobs, cripple economic activity, and shrink tax revenues.

This is no time for policymakers in Washington to be sidetracked by political squabbles. Our country and our state cannot thrive when so many people are struggling. We must act now.

Daniella Levine is the founder and president of Catalyst Miami, formerly the Human Services Coalition of Dade County.
Posted by Caitlin at 1:23 PM No comments: 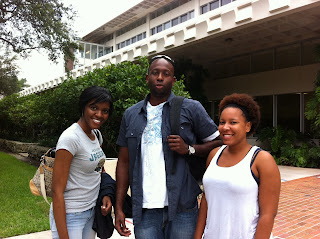 On Saturday, September 3rd, 2011, a groundbreaking event occurred. The group, Super Advocates Coalition, was officially formed during a meeting discussing how to empower students to advocate on behalf of civil rights issues, such as healthcare, economic empowerment, and education. The meeting was held at University of Miami (UM) and those attending were Catalyst Miami founder and CEO Daniella Levine, Amber Walker, Charlyn Stanberry, Imri  Yekutiel, and myself, Bryan Troupe.
The purpose of Super Advocates will be to empower UM and FIU students to serve as advocates for their community. This coalition is primarily targeted to undergraduates and graduates, however is open to anybody that is interested in advocating for their community. Some of the organizations that will be targeted are organizations within Florida International University and UM as well as community organizations throughout Miami-Dade County.
This type of advocacy is important and needed for communities of Miami-Dade. Citizens should be educated and informed about issues that will have an impact on them and their communities that they live in. One of the goals of this coalition is to ensure that communities and citizens have a voice that is heard by those who have power to make decisions affecting their future.
Super Advocates Coalition will be meeting every three weeks; the next meeting will be held Saturday, September 17th, on UM campus.
Posted by Catalyst at 6:56 PM No comments: