Dancing to Tallahassee to Expand Healthcare in Florida 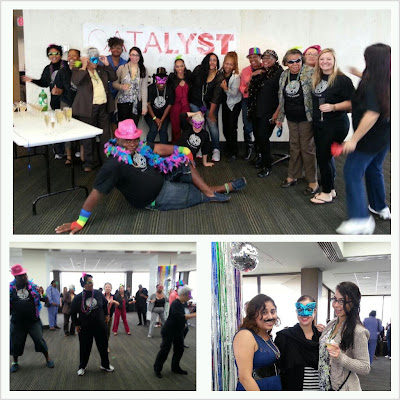 Catalyst Miami’s delegation to Tallahassee is back and red-eyed from a long journey. This was not your regular trip. This was a trip with a family of people working together to create opportunities for advocacy. There is a novel’s worth of information and stories to be told. Countless moments of laughter and unforgettable memories that make this trip stand apart as one of the fond ways our organization “keeps it Catalyst”  even when travelling to meet with our legislators at our state’s capitol hill.
Every human being we came into contact with gave us a “thumbs up” when we shared that we’d travelled on a bus from Miami to Tallahassee in order to make our voices heard on the issues surrounding Medicaid Expansion and comprehensive healthcare reform. We were joined by people unafraid to take risks, advocate on behalf of the one million Floridians who would benefit from Medicaid expansion, and learn from legislators themselves about the issues at hand during the 2013 legislative session.

On our trip were a diverse group people who are passionate about everything from Medicaid expansion and the Parent Trigger Bill to Earned Paid Sick Days. Graduates of our Parent Training Leadership Institute (PLTI), Women in Leadership, Curley’s House, Big Brothers Big Sisters, Connect Familias, and the PTA all joined us for three days at the capital.

There was Maria Christina, a PLTI participant eager to put the advocacy skills she learned in the advocacy training program to work. Up until the day she left for Tallahassee, Maria was unsure if she’d be able to attend since she struggled to secure childcare for her young daughter back in Miami. Right in time, her daughter made a phone call to a close family friend and arranged her own childcare so that her mother, Maria, could join Catalyst Miami and the rest of the advocacy team to speak on behalf of her community in Tallahassee.
I can also tell you about Lavern, who is a tireless worker and advocate for the needs of seniors and those prone to food insecurity in Liberty City. Despite being a shy person, Lavern says she comes to Catalyst Miami because we inspire, empower, and motivate her to share her voice and catalyze change for those often considered underrepresented in our communities. We were joined by others who didn't quite know who we were as an organization.
Some travelers shared stories that gave a face to Medicaid Expansion.
“As I sit and write you my story I struggle and realize how hard we need to fight for Medicaid Expansion. I find myself thinking about how my daughter's medications are going to get covered after May 2013. She will lose her Medicaid, not entirely forever, but still as a parent of a young adult with a respiratory disease, it really hits hard. Our children and young adults need Medicaid Expansion, especially those who already have medical conditions.”
Stories like these were the impetus behind our trip to Tallahassee. Stories like these kept our group advocating in unique ways. We threw a Disco Party in support of Medicaid Expansion under the premise that “the federal government is throwing a party with our tax dollars,” so why not throw a party that will cover one million uninsured Floridians, create 122,000 jobs and give our state back over $50 billion dollars. Generally speaking, many participants did not know what to expect as our Catalyst staff kept this part of the trip top secret. Once everyone entered the room, heard the disco music, and met staff members with false eyelashes, feather boas, and sequin hats, they knew that this was anything but a “regular trip.”

A ragtag group of citizens became a family of advocates.
“While the legislature waits to take action, hard-working Floridians without insurance are getting sicker,” said Catalyst Miami’s Community Engagement Director Lori Deus. “This cannot wait another year.”