Job Creation and Taxes? Has anything trickled down?

With election season near its climax, it's important to closely examine an idea the two candidates have debated: “trickle-down economics.”

Although the term does not refer to any comprehensive macroeconomic theory, it alludes to a strategy previous presidents have adopted: cutting taxes, primarily for “job creators,” under the assumption that corporations and wealthy people will then reinvest the money and generate new jobs.

Stated this way, trickle-down economics sounds good. We could even say that, regardless of tax policies, a trickle-down phenomenon should be expected because big business are the ones with the highest potential for reducing unemployment. These claims raise questions, namely how tax rates for big businesses have affected job creation in the past, and how the candidates compare in regards to their tax policies. 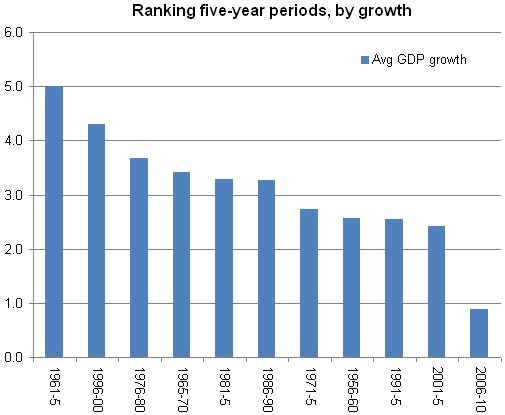 One way of looking at the relationship between tax rates and unemployment rates is by examining whether recent tax cuts for big corporations have led to high levels of job creation. In a 2010 post for the New York Times Economix blog, David Leonhardt showed how the Bush-era tax cuts did not have their intended effect. In fact, economic growth in the following years was the lowest since WWII (see graph to the right). More importantly, those tax cuts, although applied to all levels of income, benefit the high earners the most.

The other way is looking at the issue is seeing whether higher taxes on the wealthy have been detrimental to the economy and job creation. Taxes on high-earners (individuals making more than $200,000 a year) were at their highest rate, 39.6%, during the presidency of Bill Clinton. That administration also saw low unemployment rates, high GDP growth, and the end of a public debt that had been increasing since Reagan (leading to a budget surplus in 2000, actually).

So what are the presidential candidates offering? According to a New York Times article, Romney's and Obama's plans don't differ greatly in their impact on people with incomes lower than $200,000. Where we'd see a more significant difference would be in taxes for those with higher incomes. Obama promises to raise those taxes to the rate applied during Clinton's presidency, while Romney wants to maintain rates similar to those established during Bush's government.

What do you think? Is tax policy going to affect the way you vote?
Posted by Caitlin at 8:29 PM